Think back to the weddings you have been to and how you often see the same traditions:  some have developed throughout the years and some have lost their original meaning. Read below to see how some of the traditions we still see today began:

In years gone by, Knights would get down on one knee to pledge allegiance to their lord. If a gentleman knelt to propose marriage, it was seen as a sign of adoration and respect he had for the woman. However, early marriages were often an arranged transaction between the fathers of both families and they  often didn’t meet until they were together at the altar! 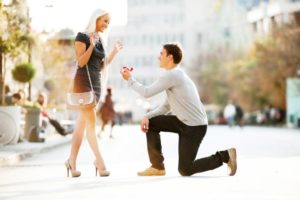 A nice day for a white wedding?

According to English folklore, each day meant something different:

“Monday for health,
Tuesday for wealth,
Wednesday’s the best of all.
Thursday brings crosses,
And Friday losses,
But Saturday – no luck at all.”

Weddings are typically held on Saturdays due to many people working Monday to Friday. However, with the average cost of a wedding being £31,974 (Hitched.com)  more people are choosing to marry on a weekday. According to the poem, it seems the earlier in the week the better.

Something old, something new…

“Something old, something new, something borrowed and something blue” is a Victorian rhyme, but what does each item represent?

Another tradition is that of a “silver sixpence in your shoe”. This tradition is said to bring the couple wealth and happiness during their life together. It was originally a sign that the bride’s father had sent the couple well wishes.

Why do the bride and groom stay apart the night before their wedding?

This tradition dates back to the days of arranged marriages, when matrimony was viewed as more of a business arrangement. The couple weren’t allowed to see each other before the ceremony for fear they’d pull out of the marriage!

The bride is ‘given away’

In the past, many brides would quite literally be handed over to “a new owner”, usually in exchange for money or dowry. Nowadays, this is viewed more as a sweet tradition and an honour for whomever the bride chooses. It can be a special moment to share with a family member (traditionally the father) or they can choose to walk down the aisle themselves, like The Duchess of Sussex. 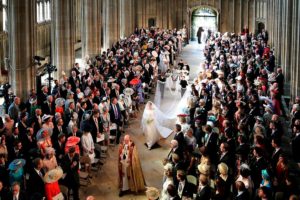 Why does the bride stand to the left

Traditionally, the bride stands to the left of the groom during the wedding ceremony so that the groom can protect her with his left arm and use his sword with the right. The groom would need to fight anyone who was trying to steal his wife when the congregation were asked if anyone knew of any reason why they couldn’t be married.

Many believe the tradition began with the Romans, who thought a vein ran straight from the fourth finger on the left hand to the heart. It is supposedly unlucky for a bride to try on her wedding ring before marriage and it is said that whichever of the couple drops the ring in church shall be the first to die. It is also said to be unlucky to remove a wedding ring before seven years of marriage.

The wedding veil hides the bride’s beauty and wards off evil spirits. Another explanation is that during the times of arranged marriages, the bride’s face would be covered until the groom had committed to the marriage.

It is said that whoever catches the bouquet will be next to be married. Contrary to popular belief, the bouquet wasn’t traditionally carried down the aisle just to look pretty, but to mask the bride’s odour, baths were few and far between in medieval times. It was believed to be ‘good luck’ to get a piece of the bride’s wedding dress. Guests would gather after the ceremony and try to rip parts of the dress, sometimes seeing it torn apart. The tossing of the bouquet originated to distract the guests while the bride and groom made their getaway.

The tradition of giving guests something to remember the day by in the form of favours has been around for hundreds of years. Originally, guests would receive five sugar–coated almonds to symbolise health, wealth, fertility, happiness and long-life. However, today favours range from lottery tickets, to sweets, to personalised items.

Will you break any traditions or be introducing any of your own?