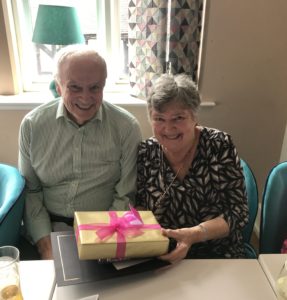 On Saturday 13th July we celebrated a most cherished volunteer, Margaret Kay, and her 40 years of outstanding service to Marriage Care.

Many friends and family joined together for a beautiful Celebration Mass held at Margaret’s parish Church of St Anne’s in Nantwich. Marriage Care’s Chief Executive Mark Molden was joined by Ex-Director Bridie Collins and local centre member Moira Hignett in paying tribute to Margaret’s exceptional service to the organisation, her friendship, love and the impact of her service. Deacon Peter Mascarenhas paid tribute to Margaret’s humility in his homily based on St John’s gospel Chapter 13 – the story of Jesus washing his disciple’s feet. He shared how Margaret had been a role model to so many through her work with Marriage Care and the parish.

A message and prayer from Bishop Brian Noble – Emeritus Bishop of Shrewsbury – was shared with those present, in which he thanked Margaret for her commitment and dedication and expressed how fortunate the diocese was to have her presence. He prayed that the work Margaret so carefully tended would continue to bear fruit.

Margaret joined Marriage Care, or the ‘Catholic Marriage Advisory Council’ as we were known then, in 1979 training as a relationship counsellor and soon after as a Marriage Preparation Facilitator. Going on to take on numerous roles both locally and nationally, Margaret trained as a Supervisor in the 80s and a Trainer in the 1990s and was even invited as far afield as Dubai to speak about Marriage Care. Margaret devoted more and more time and expertise to the organisation as the decades went by and she took on the role of Head of Centre for the South & Mid Cheshire centre in 2012, still continuing in her other roles. Margaret’s service as a counsellor and marriage preparation facilitator alone will have touched thousands of couples and families – guiding them through troubled times or equipping them to build a strong marriage.

Here are a few words from those who have been blessed to have worked with this incredible lady over the years:

‘’ I count Margaret as one of the loveliest friends I have made in my time in Marriage Care, very supportive and encouraging – someone who I could confide in and trust implicitly and great fun to be with.”   – Pauline Leach (Marriage Care volunteer- Warrington)

‘’Although highly intelligent and thoughtful, Margaret epitomizes humility… Some are called to serve in the limelight but Margaret chose to serve in the shadows and shows her humility by focusing on loving God and serving her neighbour’’.  – Deacon Peter Mascarenhas

“Margaret has been one of the most influential people in my journey with Marriage Care…. I have worked with her on several projects for Marriage Care and each time I’ve been so impressed with her lovely, calm, insightful, thoughtful contributions.” – Maggie Hase

All who worked with Margaret were clearly touched by her passion, commitment to excellence and her humility.

We thank you Margaret for all you have been to Marriage Care, its clients and those who have had the privilege to work alongside you.