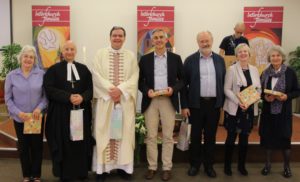 Fifty years after the Association of Interchurch Families (AIF) was founded, over 60 members and their guests met at the Hayes Centre in Swanwick on 13-14 October for a weekend to celebrate their Jubilee year. Central to the celebrations was an ecumenical service of Evensong that paid tribute to the vision of the founders of AIF. The service was led by the Anglican Bishop Tim Thornton (Bishop at Lambeth) assisted by the Catholic Archbishop of Birmingham and co-chair of the Anglican-Roman Catholic International Commission (ARCIC), Bernard Longley and the Moderator of the Free Churches, Revd. Dr. Hugh Osgood.

Back in 1968 Canon Martin Reardon, his wife, Dr. Ruth Reardon, and Fr John Coventry SJ recognized that couples from different church traditions who shared the sacraments of baptism and marriage often need a particular kind of pastoral understanding from their churches. They therefore brought together a number of such interchurch couples for mutual support. From this group grew an association that has also become a forum through which interchurch couples can share with their churches their experience of living together in love across the denominational divide.

Their experience of sharing Christ’s love across that divide, despite the challenges it presents, is a precious example of unity and a gift to the churches, summed up by Saint John Paul II in York in 1982 when he addressed interchurch families, saying, “You live in your marriages the hopes and difficulties of the path to Christian Unity”.

In a keynote speech Archbishop Longley spoke of the role that AIF has played in making the churches aware of the pastoral needs of interchurch families, and of what it had taught many church leaders about the joy and the pain of their situation. Speaking of their immense gratitude to the Association, one couple at the weekend gathering declared that without the support of the Association and its members they doubted that their marriage would have survived the difficulties they had faced.

Find out more about the Association at https://www.interchurchfamilies.org.uk/