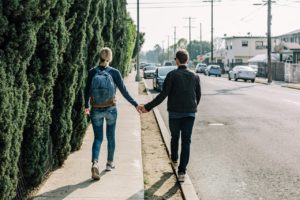 I don’t really know why it feels weirdly shameful to go to counselling – after all, you send your 25 year old Landrover in for a service with a mechanic at least once every year, and he fiddles with it and fixes up the rusted parts and gets it all nice and safe again, so really, what’s the difference?

So. We had six sessions with a volunteer counsellor at Marriage Care, which, importantly, costs whatever you can afford to pay. It was down the road in Notting Hill Gate, next to a bank and through some rickety wooden Doors Of Shame (as Mark liked to call them). We turned up the first time and went into a shabby but nice-smelling room with chairs and a tiny pencil print on the wall which I studied quite a lot and a big box of tissues. We told the lady right off that while we love each other and actually, crucially, still like each other, we had a big problem because we can’t agree on where to live. In fact, we told her, we couldn’t even mention the words ‘New Zealand’ without one of us getting constricted airwaves, red hivey skin and usually a nasty fight that might well send one of us running out into the night or into a silence that could last for days and days, one that left a kind of residual distance that makes it hard to trust each other. We said it was becoming hard to find the kindness, tolerance, patience, humour and companionship between us. Without those things, she said, you don’t really have a marriage that works anymore.

So we went into it all a bit, and she told us after the first session that one of us was holding all the nostalgia and the other was in a vacuum, and that our stubborn, desperate opposing stances were really a fight for our own mental health. She said we did have a good marriage, but a very serious problem, and so by looking into why the both of us held our positions so tightly she might be able to loosen them a bit so we could talk properly and fairly about it. Over the next five weeks she poked into our childhoods and looked at death, faith and the different kinds of love that you experience over a lifetime. She challenged us about the compromises we might each be able to make and forced Mark to weigh up the longing for extended family over the one that is right here, now.

There were some deeply awkward moments when she looked at why and how we were together in the first place and our age gap – I said I thought it had never really been a problem, but she said that actually, lady, it is now. She said that our roles have been of parent and adolescent and that if we couldn’t change that dynamic, the marriage wasn’t going to stand a chance. It was exposing and brutal, and she helped us see things in very different ways. She told us how to talk to each other better, and to recognise the patterns we keep slipping into, and she gave me ideas of how to start becoming an autonomous equal. She also kind of told me to grow up.

As for the New Zealand problem? Well, I would have liked her to sit us down and tell us what to do, but she didn’t. She said we had to consider everything, and think about who had what to lose, and how much of a sacrifice we could both stand. I like a clean ending, so I said we could go and I would give up my fight, but only if Mark would stop trying to drag me by the hair and instead start having a sensible conversation with me like I was an intelligent 40 year old woman with opinions that need to be considered fairly rather than someone who is a complete idiot with grandiose delusions of herself. Or, you know, I would happily decamp to Dollis Hill, but he wasn’t having any of that.

So it helped, it really did. I think the counsellor was brave and brilliant and even Mark said she was good, even though when she asked him scary questions he just got louder and laughed at the end of every sentence even though it wasn’t funny and he stuck his hands over his mouth as though he really just wanted to die. Awkward? Yes, but maybe you need that, you know? Poking under the bonnet, ripping out the spark plugs and changing the oil?

This post appeared originally on The Harridan, a blog by Jodi.
Photo by Vladimir Kudinov on Unsplash

back to
Get Advice