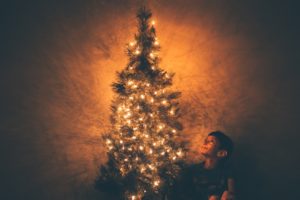 It does seem to me as though Christmas celebrations start earlier every year. When do they start in your household? At what point do you climb into the loft to dig out and dust off the decorations and then start playing Christmas tunes at full pelt?

Nowadays Christmas adverts on television mark the beginning of the festive period for many and have become as much a part of the season as Boxing Day sales, broken toys and left-over turkey. The visions they convey of festive fun, family togetherness and endless gift options can place a real weight of expectation on us, which will probably be realised by fewer than we might imagine.

When my son was very young, he wanted the ‘must have’ toy for that year. He excitedly added it to his list for Santa and waited patiently for Christmas Day. Sadly, we couldn’t afford the toy he had asked for. My son was quite happy with the presents he did receive until he returned to school in January to find some of his friends had received the longed for toy ‘from Santa’. When I picked him up from school that day he was so upset. Why had Santa given some children the toy and not him? I struggled to answer that question then, and it still brings a lump to my throat today when I remember it.

Invest time in your loved ones

The reality for some is that their Christmas lottery will not be merry or bright and may well include loneliness, sadness, conflict and hardship. Families will struggle and possibly place themselves in debt in order to obtain that elusive magical Christmas. Then in January when the bills start rolling in, the tension and anxiety over how to pay sets in and the arguments start.

Good gifts don’t have to be expensive, though, and can make a difference in all sorts of ways. Giving our time and love to those around us will not only feel good for us but will also fulfil the need of those around us to be loved and valued.
Take a walk in park, play silly games, talk, but most importantly spend time together; it is after all probably the greatest gift we can give, especially precious in the fast-paced world we find ourselves living in today. I leave you with a poem.

The Magic of Christmas by Tom Krause.

You see that magical lift the shoppers sought so long
Was not in the buying or scurrying along
That magical gift they so desperately sought
Was the spirit of Christmas – which can never be bought.